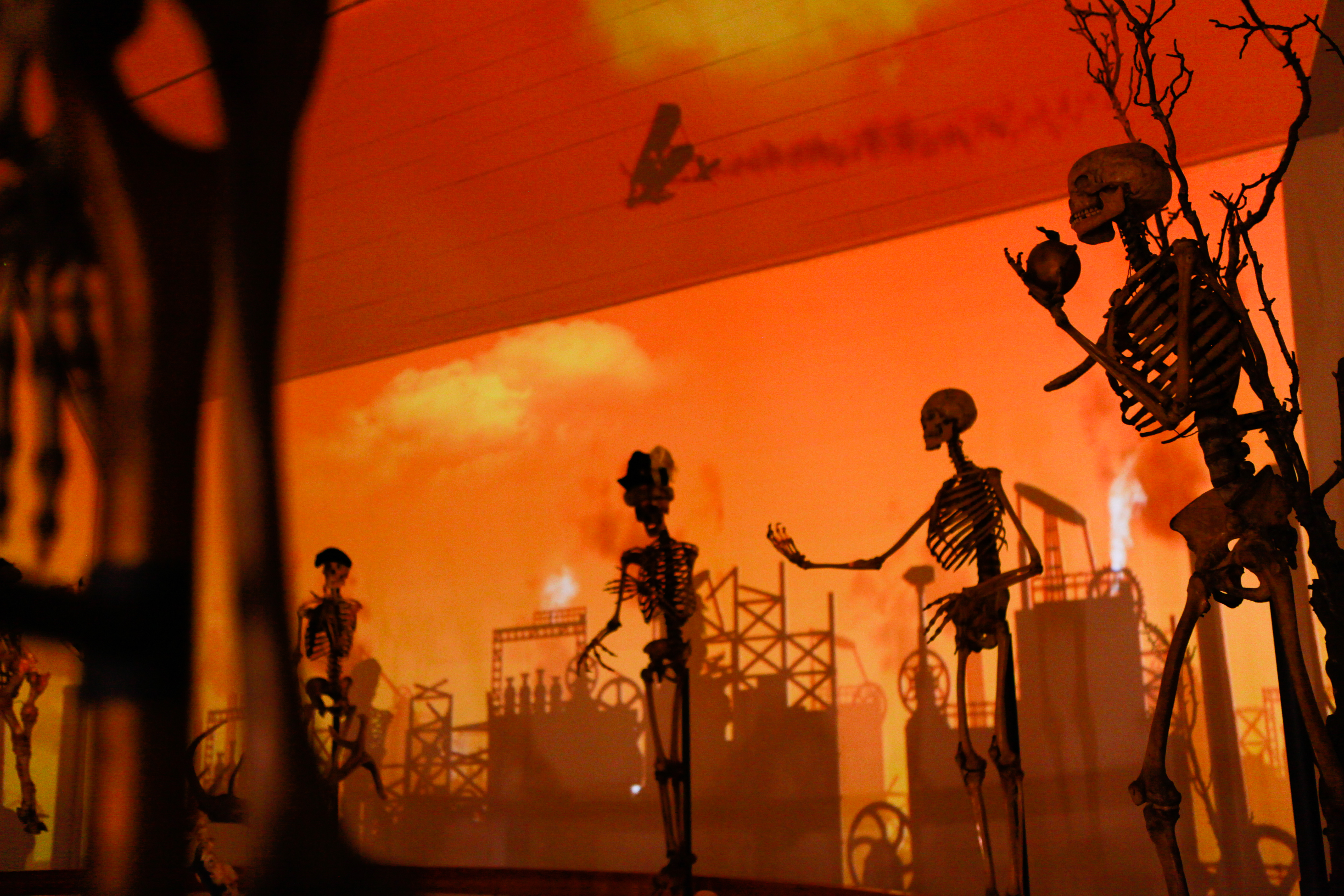 At a time when more and more museums are breaking their ties with fossil multinationals because of their deliberate worsening of climate disruption, the national museum Boerhaave is choosing Shell as its main partner. The science museum even gives the oil and gas multinational a starring role in the permanent exhibition on contemporary Dutch history of science. Shell boss Marjan van Loon is put on a pedestal. At a time when it is do or die for the climate, Femke Sleegers of Fossil-free Education thinks this is not the message we should be giving.

At the beginning of the exhibition, visitors to the Boerhaave will be treated to a spectacular video projection in which five centuries of science history are shown in rapid succession. You see how the discovery of human anatomy led to the discovery of natural laws and ultimately to the emergence of the fossil fuel industry. The room is full of human skeletons and images are projected on the walls of an industrial landscape full of nodding donkey pumps in front of an apocalyptic red sky.

Those who follow the news about climate disruption will recognize the dystopian image for what it is; a representation of the downside of technological progress. But that is not the message Boerhaave want to portray. The museum wants to celebrate the rise of the fossil fuel industry. The narrator on your headphones praises the unprecedented possibilities of industrialization. “We have built machines that have given us unimaginable energy but that we still could control.”

The video does not mention the negative aspects of industrialization. About how fossil fuels enable the economies of scale that pollute and deplete the earth in a short time. About how greenhouse gases from fossil fuels heat up the earth so much that life becomes impossible for many people, plants and animals. Because that is a painful truth that does not fit into the business model of the ‘main partner’ of the exhibition: the fossil fuel multinational Shell.

If a museum cooperates with a company, sometimes their logo is at the entrance. Or there is a room named after the company. But the Boerhaave goes way beyond that. It gives its main partner a prominent place in the permanent collection of the museum. The final piece of the permanent exhibition, the room on contemporary science, is even to a large extent devoted to the history of “our largest multinational (Royal Dutch Shell)”.

Shell’s history on a pedestal

The Boerhaave – the ex-CEO of Shell Nederland is on the Supervisory Board of the museum – has no less than seven items from the oil and gas multinational on display, without any critical remarks. And they are rather silly items. For example, there is a picture of the Shell research centre in Amsterdam and a plastic scale model of a production platform for oil and gas. The scale model dates from the 1980s, according to the description. The 80s, that is exactly the period that Shell decided to increase the height of their offshore drilling platforms with sea level rise in mind, which Shell already knew perfectly well it was one of the contributors to. But that is not on the explanatory card.

The first oil field in Sumatra

Het Boerhaave talks about the discovery of petrol and kerosene by Shell in the former Dutch East Indies. A bottle of kerosene is in a display case. There is an old photo of the ‘first oil field’ in Sumatra. Here too, there is no honest story about the downside of all that wealth: the violence with which these royal oil fields and other precious materials were taken at the time and later defended during the so-called “politionele” actions. If Boerhaave had wanted to make a bridge to current affairs, it could also have been mentioned here that the shady ISDS tribunal in international trade agreements – which is currently an effective obstacle to environmental and climate legislation – was invented by the Netherlands to safe-guard Shell’s oil interests in the former Dutch colony.

But for colonialism and imperialism there is no place in the jubilant journey past Dutch science. It is with the same ease that Boerhaave waltzes over the consequences of gas extraction in Groningen. The item ‘The Netherlands, land of fossil fuels’ literally says that the enormous gas bubble in Slochteren ‘spruces the state treasury, warms our homes and sets the soil in Groningen in motion’. As if all three are positive consequences of gas production.

The Boerhaave also writes: “Our biggest multinational (Royal Dutch Shell) is, despite recent investments in windmills, traditionally an oil and gas company.” You would almost miss it when reading this, but Boerhaave suggests that oil and gas already are largely past tense. The final sentence is also significant. “The energy transition is inevitable.” As if it were not something beautiful, the transition that will free us from all the bad sides of fossil fuel.

The biggest eye-catcher in the history of Shell is a screen with a video message from Marjan van Loon, in which the president of Shell Nederland dares to compare herself with the two-time Nobel laureate Marie Curie. In the video Van Loon dreams out loud about how people will look back on her role in the energy transition: “What I would like to see,” she says from behind a desk with a mini-windmill, “is that people do not remember Marjan van Loon but that they look back on an energy system that is very different from what it used to be. ”

Shell is inextricably linked to the energy history of the Netherlands, Shell and Boerhaave write in a joint press release about their cooperation in education. That’s true. But at a time when we are faced with the backlash of fossil fuels, Boerhaave should also recognize that Shell is equally inextricably linked to the rising sea level that threatens the Netherlands. In that sense it would have been easier to defend if the museum had exhibited the Shell paraphernalia in their room dedicated to the Netherlands’ struggle against the water. The toy drilling platform from the 80s did not look out of place here. In that period, Shell raised its own offshore drilling platforms, with sea level rise in mind which it is a main contributor to. But there is no reference to fossil fuels in the room about floods.

It is unclear whether and how much Shell has paid to Boerhaave, but the Department of Education, Culture and Science is happy either way. The Council for Culture awarded the Boerhaave more than € 1.7 million in subsidies and praised the ‘financial cooperation and cooperation with regards to content’ with Shell. Putting together an exhibition means making choices. Visitors must be able to trust that they will receive a balanced and reliable slice of history; the best story, the whole story. Many large Dutch discoveries and discoverers – including climate scientists – are not displayed in the room for contemporary science because Shell’s history has been given a place. A lot of contemporary top scientists did not get the opportunity to make a video message, because Boerhaave awarded that honour to Marjan van Loon.

What Van Loon does not tell in that video is that Shell has known for over thirty years about its role in climate disruption and has chosen not to do anything to turn the tide for these last thirty years. What Van Loon does not say is that Shell is still opposing the global transition by lobbying against climate measures and marketing so that the world becomes even more addicted to fossil fuels. What Van Loon does not say is that the small percentage of clean energy that Shell produces, not even with a huge stretch of the imagination, doesn’t come close to a transition. What she also does not say aloud but her bosses do, is that Shell is and will remain an oil and gas multinational. Until all oil and gas are gone. But the Boerhaave gives the president-director of its main partner a platform to make her green claims and fool the audience about the fossil fuel future of Shell.

The Boerhaave even gives Van Loon added authority by presenting its video in the same way as that of four leading Dutch professors, including Nobel Prize winners Ben Feringa and Ewine van Dishoeck. The NRC newspaper, which reported extensively on the new Boerhaave in 2017, wrote: “[In the room about contemporary science] there are five screens, with headphones, where five top Dutch scientists talk about five famous predecessors in their field.” That’s how it works. Even NRC fell for it. By presenting Marjan van Loon side by side with four professors, she is suddenly on an equal footing with ’top scientists’. Shell can count their lucky stars: that’s good value for money.

The relationship between Shell and the national museum is more than ‘financial and contentwise’. It is also more than cooperation. It is yet another example of the ties between Shell and the government. This exhibition was not a rush job. The national museum closed for more than a year for this new permanent exhibition. And all this time, Boerhaave knew very well that Shell is controversial because of causing and exacerbating climate disruption, tax avoidance, corruption, ecocide, human rights violations, gas drilling induced earthquakes and so on. The Boerhaave also knows that more and more prominent museums home and abroad are refusing the contaminated oil money. The Rijksmuseum ditched Aramco. The Van Gogh Museum, the Mauritshuis and the Museon broke ties with Shell last year.

Statement against our future

The Boerhaave is proud of its good relationship with Shell. The science museum once again polishes the pedestal and puts Shell in a prominent place in the museum, without mentioning its dark side. That is not accidentally, that is a statement. This is not exhibiting, this is propaganda. This prominent exhibition of Shell in a science and national museum is in no way historically or scientifically justifiable. National museum Boerhaave gives Shell the possibility to be used as a dedicated extension of Shell’s (children’s) marketing machine and thus takes a stand against our future. Despite the wonderful renovation of the museum, Boerhaave itself has become a museum piece. 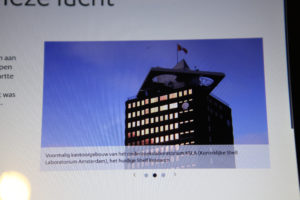 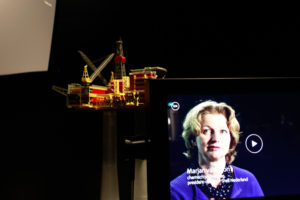