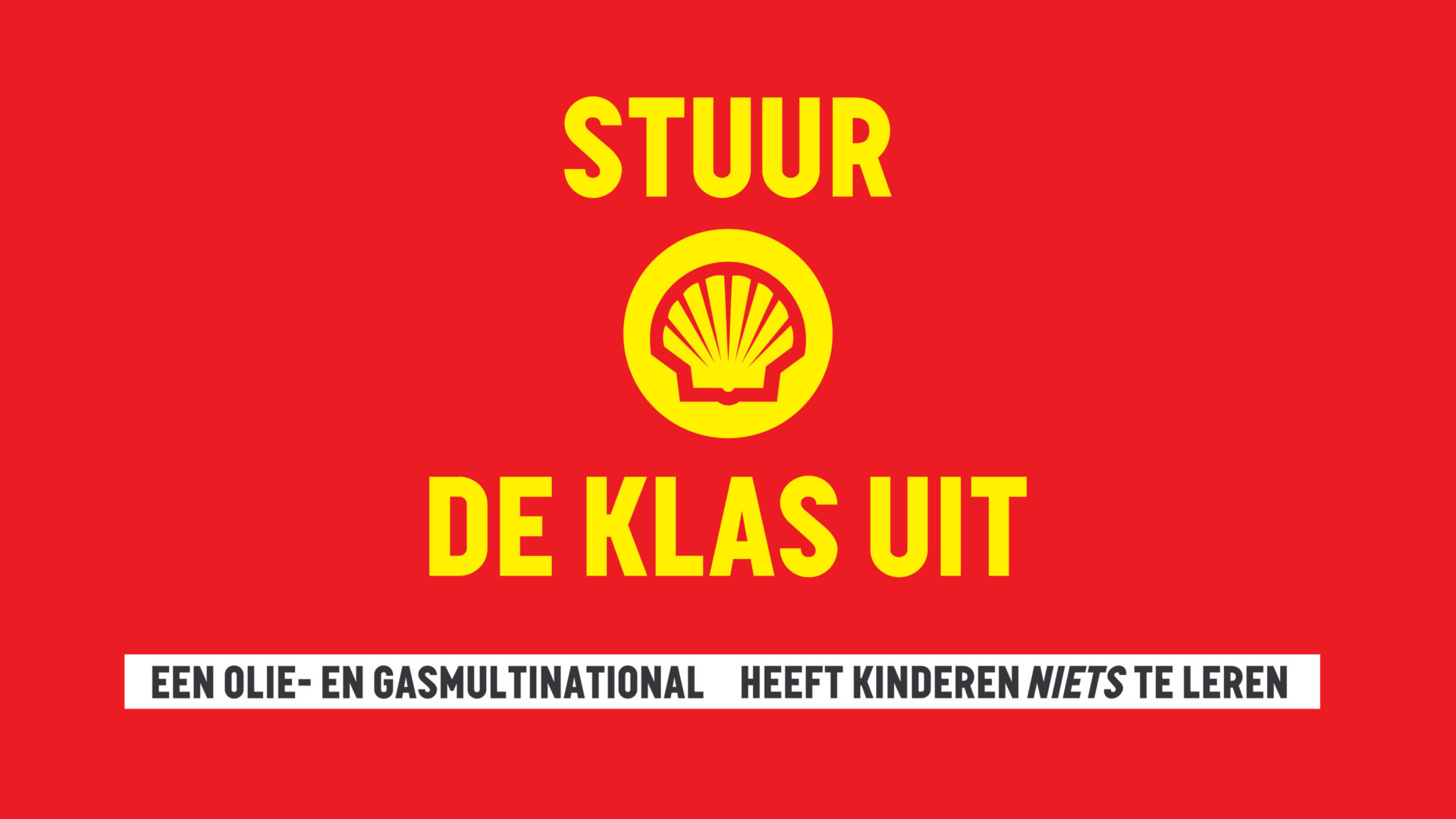 To its shareholders and the media, Shell says it’s strongly supportive of Paris. To kids Shell tells a different story: in 2050, the world – according to Shell – still runs on 70% coal, oil and gas. “These stories don’t add up.” Fossil Free Education speaks at the Annual Shareholders Meeting (AGM) of Shell, 2018.

Good morning. I am Femke Sleegers and I will speak on behalf of Fossil Free Education.

<to the audience>
What do you think, does Shell like kids?

<to the board of directors of Shell>
I know a lot of these proxies (NGO’s) here today, will say you don’t. That Shell doesn’t like kids, because you’re not minding their future.

But I put a lot of study in what Shell does for kids, and I know you do like kids.

I would say, it is almost magic you pull on youngsters. Making Shells part in fueling climate change disappear like *poef*.

In Groningen, Shell teaches at elementary schools, that gas extraction might feel like a little tremor. At high schools, Shell teaches teenagers, that the dangerous fossil fuel methane – also known as natural gas – is in fact the solution to climate change.

Yet the most stunning vanishing act, you pull at Festival Generation Discover.

At the festival you invite kids to make a jigsaw puzzle of the energy mix in 2050. I was baffled to see the outcome. According to Shells puzzle, the world in 2050 still runs on 70% coal, oil and gas.

That is 70% more than the world agreed upon in Paris.

So, at Generation Discover, in front of 1 million kids, you tried to make the Paris Agreement disappear! *poef*

I asked your employee at Generation Discover why Shell would tell kids things that are so contrary to Paris. And this was his answer. He said: “We want to give children a realistic version of the future”.

So while their parents are investing in solar panels, Shell teaches their kids: ‘Don’t mind Paris. It’s not realistic.’

Or as Ben van Beurden put it, at last years AGM: “Paris is in the realm of fantasy.”

Is that a blush on your face? Are you ashamed?

You should be. This is not ‘fully aligning your business’ to Paris. This is pumping up as much as you can pump up.

This is fooling kids and society at a decisive moment in our history. Making us believe there’s no alternative and we need oil and gas for decades and decades to come.

Now, I have one question for you.

At Generation Discover Shell tells kids that Paris isn’t realistic. And yet, here, today, you say you are strongly supportive of Paris? Those stories don’t add up.

So, I ask you now: which one is true?

“First of all, I do like children. I have four of them. And I also like to look out for their future. As we all do.

Indeed, we do like to encourage scientific, technical, engineering and mathematic subjects among children and we believe this is needed in society going forward. And we will be beneficiary for it if indeed people do choose this subjects, to make their career and hopefully also become potential candidates to work for a company like ours. I think we have — we can’t directly educate children ofcourse – but we do engage with them and stimulate their interest.

And indeed you are right. We do like to bring realism to the discussion as well. We do support Paris. In fact we believe Paris is doable. And we also believe it’s a tremendous challenge. At the moment we are not as a society on track to meet Paris.

Governments have agreed to national determined contributions to climate change, but if you add  them all up you come nowhere near 2 degrees C. Still we believe that society will put so much pressure on politicians that it will happen, that indeed the curve will bend, and that in maybe 5- 10 years time, we will be on that trajectory downwards. But it will be difficult to achieve that, partly, simply, because there’s a lot of inertia in society, a lot of inertia in the energy system.

55 trillion dollars of investments will have to be in a way rewired to create that downward trend.

So, it will be a real challenge to make this happen. We believe it can be done and we believe we will play a role in it, actually, we will play a role in it to make it happen. But at the same time, we believe a sense of realism is important to be a responsible player. Honesty is one of our core values, that also means intellectual honesty. Not misleading people, with al sort of stories that are basically not true, can not be delivered on.

Indeed, we believe, in 2050, there will still be a significant amount of oil and gas in the energy mix simply, because it is impossible to do otherwise. Despite this, it doesn’t mean we <onverstaanbaar > Paris. Even by 2070 when we are at the so called net zero emissions, there will still be oil and gas in the mix and that is simply because there are a number of energy applications  that are very hard to replace by renewables.

A lot of people mistake energy and electricity. A lot of people think as long as we have enough solar panels and wind power, we can do without fossil fuel. Imagine if we did all this at one go, in The Netherlands, we had 100% renewable electricity provision, that would take care of 17% of energy consumption. 83% will still be oil and gas and yes indeed coal, because we just built a number of coal fire power generation stations in this country.

So, we think all of this needs to change, it needs to be bend around, but it will take time to make it happen. We are in favor of working on that transition, we are in favor of policies that make things happen, by putting a meaningful price on carbon and we are ready to invest in those parts of the energy system that are needed to bring this transition about.

I also firmly believe, Paris is achievable, it will be difficult and that we will play a role in achieving it.”